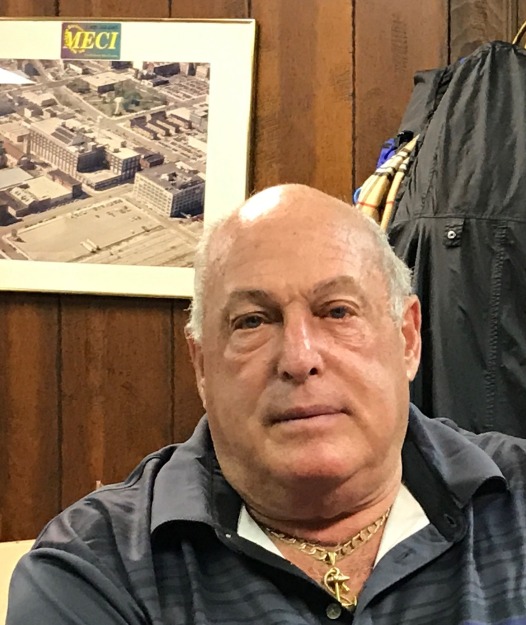 Although Sanford “Sandy” Mendelson started with few resources and only a high school education, he has developed successful businesses, closed or revamped businesses, and bought and sold real estate. I asked Sandy how he crafted his career. The highlights of his story follow.

As a child growing up in Dayton, Sanford “Sandy” Mendelson “liked to do everything except read and write in school…I just loved building things, making things, tinkering with my hands. My dad had a scrapyard in 1955 and I started going to the yard and taking stuff apart, sorting stuff out and playing with junk and taking stuff home.”

During his high school years, “I was the handyman of the school, fixed everything… in charge of the stage crew…a lot of the things I was in charge of, because I was a go getter.”

What happened when Sandy’s dad died in 1963?

Three years after Harry Mendelson opened Mendelson’s Electronics, he died, leaving the family in dire straits. “We had $68 in the bank, no money at all, two homes, four kids, a mother sick with emphysema. It was a bad scene.”

The day before Harry died, “we went to look at some stuff for Max Isaacson, owner of Globe Industries. It was all Cessna 180 autopilots. He said, ‘I got to get them out of the building.’ The next day, my dad has a heart attack and passed away. Max comes to the house for sympathy for my family. He says, ‘Do you want this stuff?’ We had no money. Max says, ‘Take it. You sell, you pay me.’ So I took an ad in Flying Magazine. Cessna 180 autopilots had a ridiculous price. They flew out of here. So that was the guy that gave me the break, who started me. He gave me an opportunity to excel as a merchant and think how to make a living.” 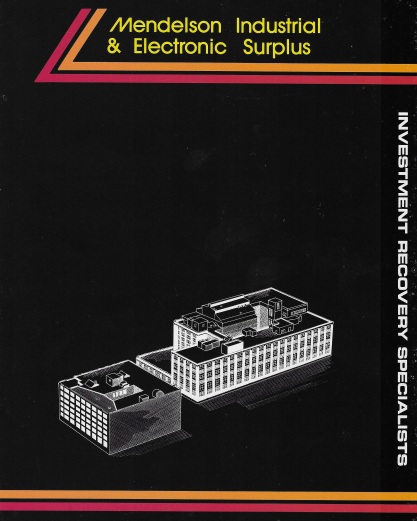 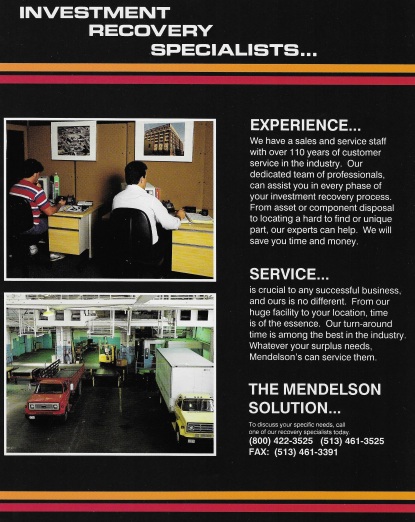 How did Sandy’s mother influence him?

Shortly after his dad passed, Sandy and his mother, Ida Mendelson, discovered Harry had borrowed $10,000 from Winters Bank on a personal note. “We knew nothing about it.” When Sandy and his mother went to see the banker, “I said, ‘my dad did it, we’ll honor it in one year, no interest.’ The banker said, ‘No.’ My mother was a really, really tough lady. When she got in your face you knew you’d been chewed up.” Ida stood up to leave and the banker quickly backpedaled, agreeing to Sandy’s terms. “One year to that day, I walked in with $10,000 and paid the man back and I’ve never looked back since.”

“I used to bring all the boys over to play poker and my mom would say, ‘You know the rules. It’s for keepsies.’ And she would clean us all out. She had her little purse, put the money in there and zip it. ‘It’s keepsies!’ Then she’d open the refrigerator and feed us all. We’d come back the next week again and try to beat her.”

“I learned my hawking through her. She was a tough lady, but she knew how to make a deal; she was very smart.”

How did Sandy make his first big deal?

“I was going by NCR and I see they’re scrapping stuff out. So I pulled up to the dumpster and asked ‘What’s going on here?’ ‘We’re changing our modes, we’re going from electro-mechanical to electronic cash registers.’ I was in the dumpster looking around, the guy says, ‘you can’t be in here. You got to go up and see… the head of steel purchasing.’ I go see him and say, ‘I’d like to buy this material.’ He said, ‘You’ve got to scrap it out; it’s got to be destroyed.’ So I crossed my fingers and said, ‘Okay.’ I went ahead and gave them more money than they were getting. I got some people really mad at me…because I took the deal from them. They’re throwing everything away; they don’t know if they need it for future use or nothing.”

“We took the exact box out of NCR, put it on a skid, numbered it, had the same rack in the other building, put the same part back in the same number order it was before. After that I had 300,000 different part numbers” and it was time to talk to NCR.

Sandy took his printout of all the parts with him. It was so long, he had to use a two-wheeler to transport it. “The guy went nuts. ‘You did what? You were supposed to destroy this stuff.’ What I did wasn’t exactly kosher, but I didn’t sell the parts to their competition; I did nothing with it. I said, ‘I know you need some parts back. I know you got problems with your service areas.’ They had 3,500 service departments around the world with no parts…they couldn’t make anymore, because all the machines – they tore them down and got rid of them. They were having serious problems.” 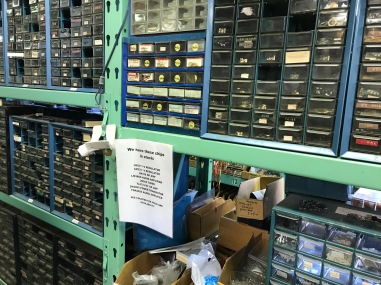 He sold the parts back to NCR on an as-needed basis at 65% of standard cost. “They were selling it for ten times what I sold it back to them. For 30 years, we were buying surplus inventory… and we’d ship within 24 hours anywhere in the world. They would pay the freight. That’s how I got wealthy, because of them. I bought all these buildings, because I needed more space for their deals. Ten years ago, NCR started changing. The old machines were gone and I did scrap everything. It was a very good relationship.”

Has Sandy’s business changed since that first big deal?

“So many things I’ve done over the years.” Sandy started Mendelson’s Sporting Goods, which grew into four stores. “When General Surplus burned down, I started buying GI clothing from the bases. One thing led to another. I bought ten combat boots, and I bought a hundred combat boots, and I bought sweatshirts. We had skis, we had archery, clothing. We done very well for the first years, then Walmart came in and you can’t beat the big boys. Things were going real tough, so I had to close that up. I paid everybody off I owed. Someone said, ‘Go bankrupt.’ I don’t do that.”

Sandy continued to experiment with new ways to sell merchandise. Using the outlet 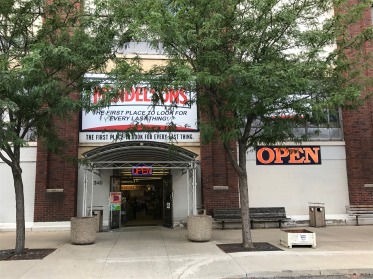 stores in Reading, Pa. as a model, he opened The Mart Factory Outlet in 1982. The Mart offered sporting goods, housewares, clothing and appliances. “It started out doing real good. I would get 10% of the sales as the rent; we collected the money and paid the sales tax. Then that fell apart…so I put my own merchandise in here – Mendelson’s Liquidation Outlet. We’ve done okay ever since.” 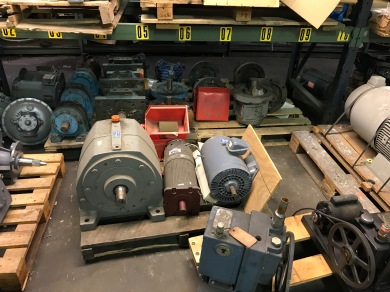 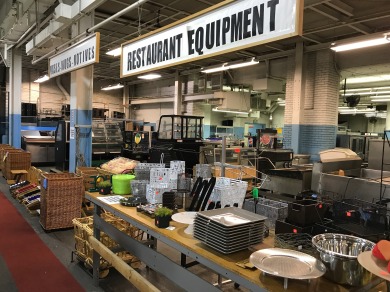 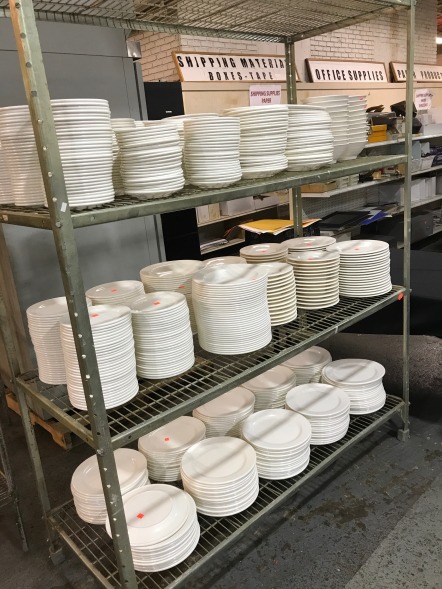 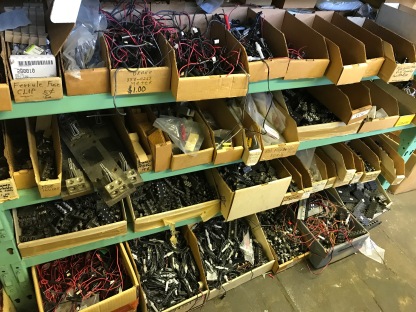 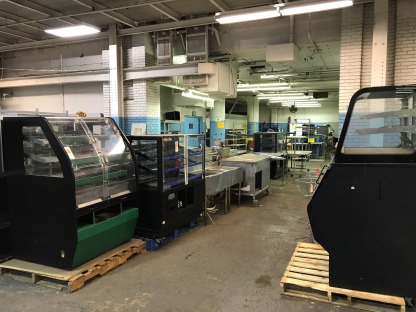 In 1986 Jeffrey Stahl told Sandy he was frustrated with his employer, an electronics firm. “Jeffrey knew how to sell and I knew how to buy. So we opened a company called Parts Express International (PEI). I have a lot of product, but I don’t have the means to sell it right. Jeffrey is a very professional and ethical person who knew how to put a catalog together and work it. It’s 31 years later, and it’s worked extremely well. His tremendous retail entrepreneurship gave me the fortitude to stay in that business; he’s the bones and the body.”

Did Sandy open any other businesses?

“Another crazy Sandy idea…I needed to get my trucks off the parking lot. I had the whole 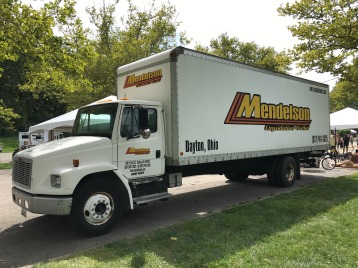 lot filled full with trucks and they wanted that lot for baseball.” In 2001 Sandy bought the site with the old B&O Railroad freight terminal and parking for the trucks next to 2nd Street Public Market in Dayton. Based on the concept of the Springfield, Ohio Antique Center, he renovated the terminal as the Antique Mart in Webster Street Market with a deli and multiple consignment booths. He ordered “400 showcases and we filled them full of merchandise.”

“The first two years of the Antique Mart were phenomenal. Antiques were doing very well and then here comes eBay…and antiques go in the toilet and all my tenants started pulling out. So I said, ‘Well Sandy, let’s start selling showcases.’ I sold every showcase and actually I made some money on them. Sold them all and went ahead and decided to make a banquet center out of it.” 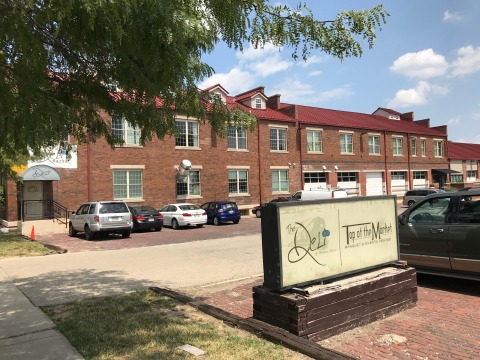 Sandy executed his pivot by revamping the market as The Deli and Top of the Market, offering a deli-style restaurant on the first floor and event facilities on the second.

In 2005 John and Mary Beall’s daughter was planning to hold her wedding reception at the Top of the Market, but Sandy wasn’t happy with his crew there. “The day before the wedding, they walked out, so I put the Sandy call out, “I need help.’ I had so many chefs, so many waiters, people stood in line, ‘how can we help,’ because I help anyone who has a problem.” 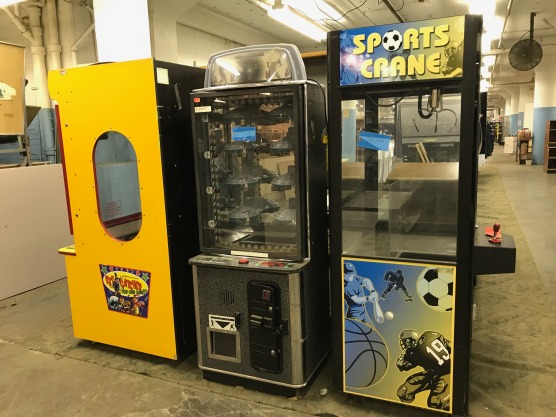 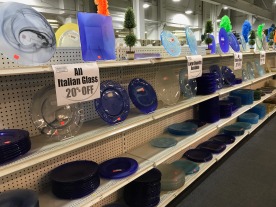 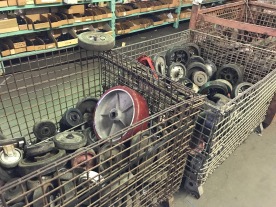 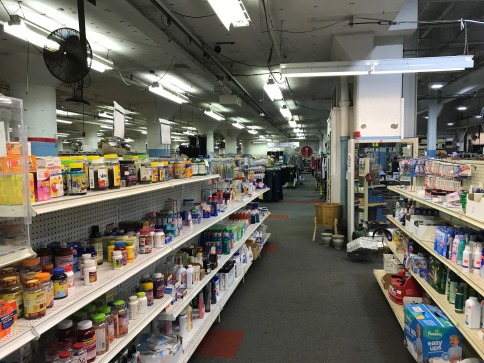 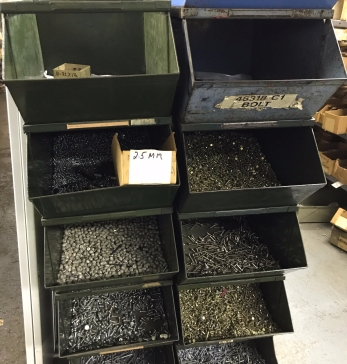 Have you ever met someone, heard about their job and wondered how they came to do what they do? How did they find that career? What path in life led them to that? Where did they learn the skills necessary to make it work? In this blog, I will interview people who’ve followed a variety of career paths and share the stories of how they have crafted their careers. ~ Nancy