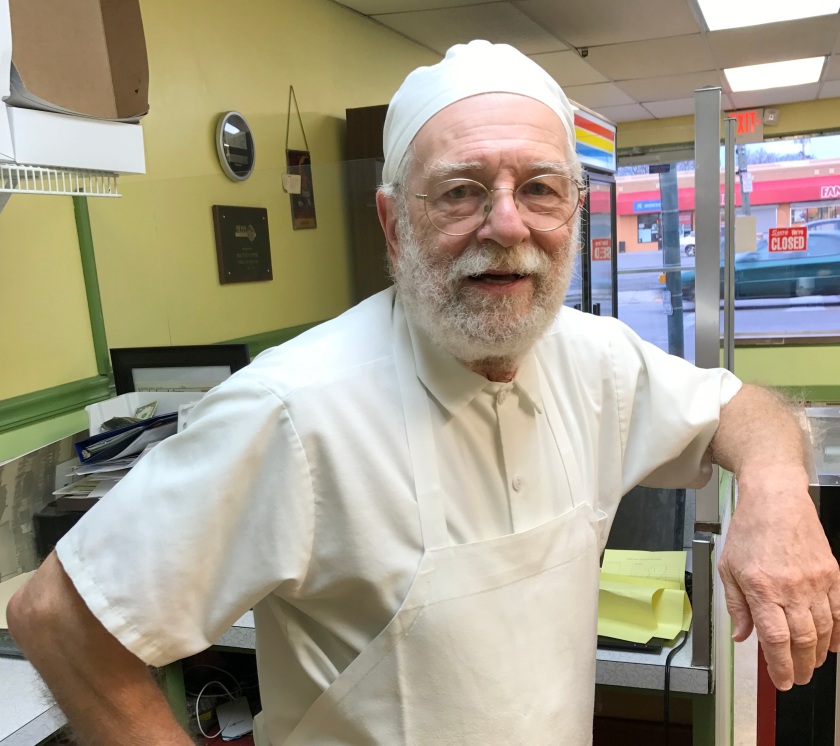 Do you flourish in the kitchen – mixing dough, baking cookies, and decorating cakes? Have you wondered if you could do it for a career? Bill Evans has been feeding people his entire career, first as an owner/baker and then as executive director of the House of Bread. I asked Bill how he crafted his career. The highlights of his story follow. 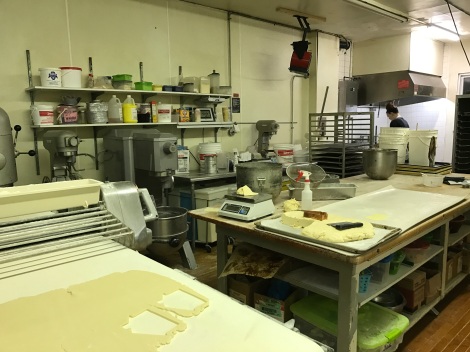 My conversation with Bill Evans started at 7:00am at Evans Bakery in Dayton four days before St. Patrick’s Day. Bill and his daughter, Jennifer, were hard at work. The dough rolling machine rumbled, oven timers rang, and the wide cookie dough lifter clacked against the cutting table. Completely dressed in bakers white, Bill talked while he prepared the cut out shamrock cookies.

How did Bill go from a schoolboy in Bordentown, New Jersey to a bakery owner in Dayton, Ohio?

When Bill was growing up in Bordentown, New Jersey, his father was a baker and his older brother was a baker, but he wanted nothing to do with baking. He made his first acquaintance  with the business as a boy. He decided that, unlike his brothers and sisters, he wanted to go to the Catholic high school. His father said, “Well son, that’s what I want you to do, too, so you better get you a job.” So Bill cut grass and swept the floor in the bakery where his dad was chief baker.

When Bill graduated from high school, he wanted to go to college. His father said, “Well, I want that, too, son. You better get you a job.” Bill knew he couldn’t mow enough grass to pay college tuition, so he looked around. The employment options in Bordentown were limited, however. Bill knew he didn’t want to work in the Ocean Spray factory, so he applied for a job at the Royal Bakery in Trenton, New Jersey.

Management at the bakery assumed that Bill had been baking all his life and hired him. Bill’s father gave him a crash course in baking and Bill went to work. It didn’t take long for the folks at Royal Bakery to realize that Bill was a complete rookie. But he was smart and trainable, so they kept him.

Did Bill ever go to college?

Once Bill had earned enough money to pay the tuition, he quit his job and enrolled at Miami University. Unfortunately, he ran out of money after the first year and returned to Bordentown. After another year working at the Royal Bakery, Bill boarded a bus for the University of Dayton, where he knew a lot of kids from New Jersey.

Bill had never been to Dayton before and knew nothing about the city, but he knew his first task was to find a job. He got off the bus on Brown Street outside the South Park Bakery, which had a “Help Wanted” sign posted in the window. He set his suitcase down on the ground and walked in to ask for a job.

The old baker groused about hiring him, but finally agreed to test Bill for a week. The old guy grumbled at him all week, but at the end of the day on Friday, he said, “See you tomorrow”. So Bill knew he had a job. Bill’s Monday – Friday hours were 2:30am – 6:00am, which gave him time for classes the rest of the day. Saturday was an eight-hour day, and Bill looked forward to resting on Sunday. But when he clocked out that first Saturday, the old baker said, “See you tomorrow, kid.” Bill swallowed hard, knowing that meant he had no days off, but he needed the money. So he stayed.

Bill worked those hours seven days a week and went to classes until his senior year. Then he asked the old baker for a nickel raise. Without hesitation, the old guy said, “Kid, good luck to you. There’s the door.”

Bill was majoring in Social Work, so he used his new free time to get an internship with Juvenile Court. He graduated from the University of Dayton with a strong foundation in social work, insight into the juvenile justice system, hard-earned experience in the bakery business, and no idea of what came next.

So Bill got a college degree. Then what?

When Bill’s internship boss asked him what he was going to do after graduation, Bill said he was going to take the first job he could find anywhere in the world. In response, his boss offered him a full-time job in the Juvenile Court. So he stayed right in Dayton. He graduated on a Saturday and went to work the following Monday

What propelled Bill back into the bakery business?

Bill got married and rapidly discovered there was no money in social work. So he worked at another bakery on the side and kept his ears open for opportunities. In 1969 after eighteen months in Juvenile Court, Bill heard that the Schattschneiders were ready to retire and wanted to sell their bakery. Bill didn’t know them, but he went over to talk to them. As he said, “they kind of liked each other”. The Schattschneiders wanted $5,000 for the down payment, but Bill didn’t have that kind of money. Fortunately, he and his wife, Rosemary, were able to borrow it from her parents.

Bill signed the contract for the purchase of the bakery from the Schattschneiders on a Friday and he opened Evans Bakery the following Monday morning. When I asked him how he learned to manage a bakery, he shrugged, “I kind of have that baking gene, and I never found it to be much of a mystery.”

Is the bakery business really that simple?

I watched Bill and his daughter, Jennifer, quickly pushing the brick of dough through the rolling machine, cutting the cookies, and spreading them out on the deep layer of green sugar that coated the cookie sheets. I concluded running a bakery may not be a mystery, but it’s demanding work. And like any business, the owner must plan ahead, track money and details and manage staff.

Did Bill head for the links when retirement beckoned?

After running the bakery for 35 years – from 1969 to 2004 – Bill was ready to sell the bakery and retire. He emerged from retirement almost immediately, however. The Board of Trustees of the House of Bread knew him through his volunteer work at St. Vincent DePaul Dayton. The House of Bread Executive Director was retiring, so the Board asked Bill to fill the position. Happy to have a new challenge, Bill agreed, despite the fact that he had no experience running a nonprofit organization. House of Bread, 9 Orth Avenue, Dayton, Ohio, provides a hot, nutritious lunch to anyone in need.

Bill expected to spend a month working with the retiring Executive Director, Jean Taylor to learn on the job. They met at Meadowbrook Country Club to plan, or so Bill thought. On arriving, Jean directed Bill to move five giant boxes from her car to his. Then, after four hours of instruction, she left. “The shortest training on record!”

How did Bill translate his bakery skills to being an Executive Director?

Bill applied his planning skills honed by running the bakery. Before Bill started at the House of Bread, the Board of Trustees had raised $100,000 as seed money to build a new facility. Unforeseen engineering work required to stabilize the ground, however, quickly ate that fund. So Bill started with no money to fund construction. Working with the Board, Bill found a way to complete the $549,000 project. When Bill left the House of Bread in 2014, their debt was paid down and now the organization is completely debt-free.

Raising the money to operate a small nonprofit is generally the job of the Executive Director. Bill was used to selling baked goods for profit, so running a business by asking for money it was new. Generally nonprofits cover expenses by raising money in two ways – asking for donations and writing grants. Although he wrote some successful grants, Bill said he didn’t like writing them. He was, however, “really really good at asking people for money” even though he didn’t enjoy that, either. His persistence and thick skin made it work. If the person gave Bill money, he would say, “I love you!” If they turned him down, he would say, “I love you.”

Bill said he had a good ten-year run at the House of Bread. As much as he liked doing it, he said, “Sometimes there just comes a time. It’s very exhausting to minister to the poor, the needy and the hungry.” So he stepped away.

Did Bill settle into a rocking chair this time?

Seven years after Bill sold the bakery, it was available again. Fed up with their jobs in Detroit, Bill’s daughter, Jennifer, and her partner, Matthew Tepper, decided to return to Dayton and reopen the bakery. On December 17, 2012, they opened Evans Bakery as a full-service bakery, Monday through Saturday. So Bill came out of retirement to work for Jennifer on a part-time basis. 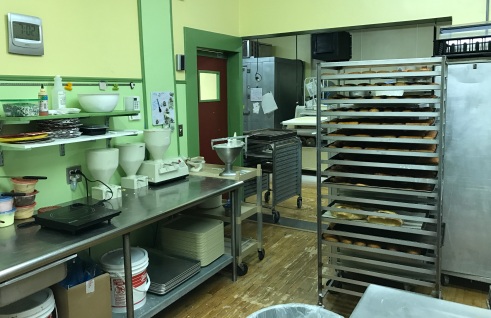 As Bill sprinkled flour and then ran a brick of cookie dough backwards and forwards through the rolling machine, he told me he enjoys the work. Then he lifted the flattened dough and said, “But this is the last time I come out of retirement!”

Leave a Reply to Crafting a Career Cancel reply

Have you ever met someone, heard about their job and wondered how they came to do what they do? How did they find that career? What path in life led them to that? Where did they learn the skills necessary to make it work? In this blog, I will interview people who’ve followed a variety of career paths and share the stories of how they have crafted their careers. ~ Nancy